As most people know, the cancer fighting technique known as CAR T cell therapy has been getting a lot of attention these days, due to some remarkably positive clinical trial results. Two different versions of CAR T therapy have now earned FDA approval, so it seems that this type of therapy will inevitably be expanded to meet the needs of a considerably wider patient population. There’s a fairly large obstacle standing in the way of this expectation, however. Most clinical trials to date have been based on CAR T cell treatment as an autologous therapy, with the starting materials coming straight from the patients themselves. The problem with this autologous model is that it’s difficult to implement on a commercial scale, due to the limited availability of starting material.Using patient-derived cells helps to avoid the dangers of transplant rejection, but since cancer patients often have weakened or compromised immune systems, collecting enough immune cells to do the job is difficult.

To resolve this issue, researchers have been developing ways to use T cells from healthy donors rather than patients. This “allogeneic” approach would significantly increase the availability of starting material, while decreasing costs, since CAR T products can be manufactured on a larger scale. It will also provide “off-the-shelf” availability due to the fact that donor-derived products can be manufactured and frozen away for future use. One drawback to using an allogeneic approach, however, is that donor cells must undergo an extra round of gene editing to incapacitate the T cell receptor (TCR) gene. Donor cells with an intact TCR gene will interact with the patient’s immune cells, potentially eliciting a dangerous immune response known as Graft versus Host Disease (GvHD).

The researchers with the North Carolina study have come up with a clever answer to this particular problem. Using T cells isolated from healthy donor leukopaks provided by HemaCare, they have engineered a way to “knock out” the donor TCR gene by targeting insertion of the CAR gene sequence directly into the TCR locus. The result is a CAR T cell that no longer expresses its own TCR but can seek out cancer cells for destruction. This elegant strategy for creating allogeneic CAR T cells in a single gene editing step will make the process more time and cost effective. Being able to target the CAR cassette to a specific location should also decrease manufacturing variability, resulting in a more consistent product. 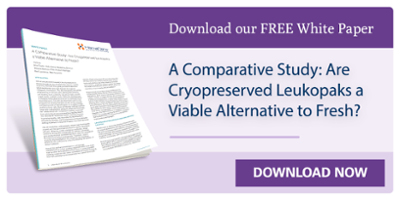